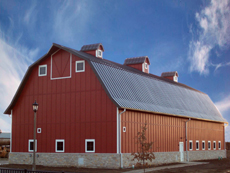 In 2004, the Village of Sugar Grove and Engineering Enterprises, Inc. began planning for projected community growth, which included the 1,300-acre Settlers Ridge subdivision located on the east end of town. The planning efforts consisted of a detailed water works system needs assessment and groundwater exploration efforts. From these efforts, the Village and EEI identified various infrastructure requirements.

The initial group of improvements implemented was the Settlers Ridge water works improvements, which included:

Additionally, the Village expressed a desire to construct facilities that captured the rural agricultural heritage of the Midwest and the Village, as well as, compliment the conservation design principles of the development. Numerous renderings depicting combinations of materials and architectural features were created for Village consideration. The concept that emerged was modeled after a farmstead.